…Crest or Aquafresh or Colgate is the best toothpaste.  No biggie.

How about when 4 out of 9 Supreme Court Justices decide you do NOT have the right to own or carry a gun?  Still no biggie?

What happens when that 5th Justice signs on with the rest of the liberal Justices?

“A well regulated Militia, being necessary to the security of a free State, the right of the people to keep and bear Arms, shall not be infringed.”

Over the 4th of July weekend 2010, Conservatives and 2nd Amendment Advocates should have felt heart-wrenching-cold-shudder as a rumor spread that Justice Anthony Kennedy would soon retire — a move that (after Obama appointed another Progressive) would put the left-wing slant of the Supreme Court firmly in control (again 5-4).  And, this is what the Progressives have been praying for since the advent of candidate Barack Obama — that they would win the Presidency and change the makeup of the Supreme Court to allow a rubber stamp of their agenda… …which includes the destruction of free speech (except theirs) and the destruction of the right to keep and bear arms (except the government).

Elections have consequences, and when you lose the right to defend yourself legally against the gun-toting-maniac-criminal that is crawling through your window to rape your daughter, kill you and steal your wallet… …remember your vote for Barack Obama!

Posted by bbollmann on July 6, 2010 in Amendments, Bill Of Rights, Conservative, Liberals

On July 3rd, Michelle Moore and I decided to do ‘something’ in the O’Fallon, Missouri parade.  We thought we would be walking for our friend Dave Evans who is running for State Representative in the 19th District.  But as we walked about 2 miles from the midpoint of the parade to where (we were told) Dave was starting from, we instead found Judy Sofka and Annette Read — two great patriots in the St. Louis area!  Never did see Dave.

We chatted with them for a while, and we met Casey (I think) who is a teacher and great patriot fighting the battle against Obama’s Race To The Top (Race to the Trough) takeover of the public school system.  We soon realized that Judy and Annette were all by their lonesome and decided to join them for the parade. 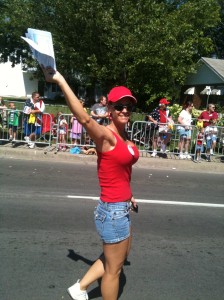 We took turns carrying the sign that Jay Harris had helped create and passed out over 1000 fliers telling about Proposition C / Healthcare Freedom Act.  Having marched in parades as a saxophone player and cub scout troop member, this was the most fun I’ve had in a parade to date.  We calculated that our total walk for the morning was about 5 miles.

We were asked not to hand out fliers, so I just hawked them loudly and handed them to folks who requested them.  I heard one woman sitting in her chair protest, “We don’t need that.”  We laughed sadly at her ignorance and prayed that the voters in Missouri would choose freedom. 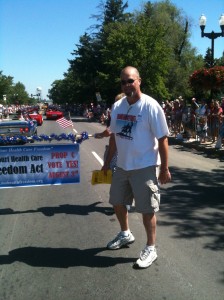