In Missouri we have a very heated State Senate race happening in the 26th district. All the players have much at stake and are fighting hard to earn the privilege of representing the good people in the 26th.

Read More About It Here

As we move forward with the 2010 fall elections and the Conservatives (Tea Party) are charged with everything from being Astroturf to Racist to Xenophobic, let us remind ourselves in one simple picture who we’re dealing with.  As the Health Care debate was raging, I was one of about 5 people who counter-protested MoveOn.org at Claire McCaskill’s office on 10/14/2009.  A group of about 75 ‘regular people’ were there to tell Claire that we (out of yours and my pocket) should give them health care, um, now.

After about a half-hour of megaphone chanting, the group paraded down a block, crossed the street, paraded a couple of blocks, crossed the street and returned to Claire’s office for a photo-op.  Some late arriving news media snapped up some pictures of the group much like the one below: 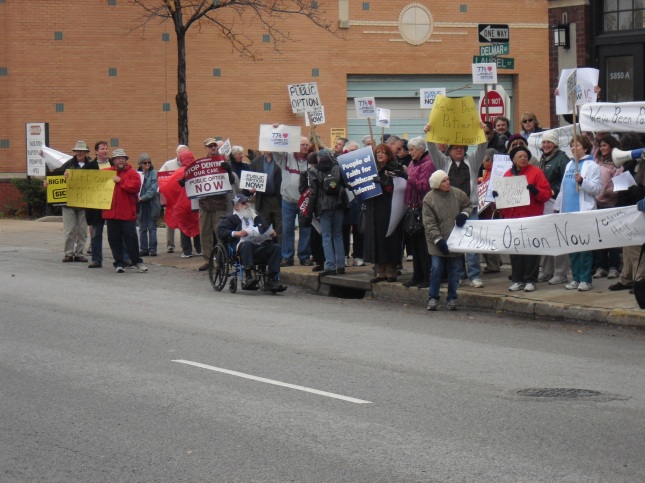 You’ll notice the gentleman sitting in the wheelchair.  He arrived a little late for the parade around the streets, so he was pushing the wheelchair and running behind it to catch up with the protesters.  Sadly, the media neglected to use that fact to show the true nefariousness of the movement.

As the elections heat up, keep your camera and video ready.  The truth behind the Progressive cancer is there waiting for light to be shed!

And wow, I just noticed!!  This group of ‘regular people’ is as white as MSNBC’s lineup of anchors.  MUST be a bunch of racists!

Gubmint and How Gubmint Works

Once upon a time, the government had a vast  scrap yard in the middle of a desert. Congress said, “Someone may steal  from it at night.”  So they created a night watchman  position and hired a person for the job.

Then  Congress said, “How does the watchman do his job  without instruction?” So they created a planning department and hired two people, one person to write the instructions, and one  person to do time studies.

Then Congress  said, “How will we know the night watchman is doing the tasks  correctly?” So they created a Quality Control department  and hired two people. One to do the studies and one to write  the reports.

Then Congress said, “How are these  people going to get paid?” So They created the following  positions, a time keeper, and a payroll officer, Then hired two  people.

Then Congress said, “Who will be accountable  for all of these people?”

Then Congress said, “We  have had this command in operation for one Year and we are  $18,000 over budget, we must cutback overall  cost.”

So they laid off the night  watchman.

NOW slowly, let it sink  in.

Posted by bbollmann on July 19, 2010 in Conservative

Does Hitler, Mao, or the President Reward Virtue?

I don’t trust Hitler, Mao, Friedman, Donohue OR the President Obama to be the ‘Angel’ that Friedman mentions.  All men and women are working for their own self-interest.  Even Mother Teresa was working for what she thought was the best course for her life.  It was VERY noble, but still in her self-interest.

Posted by bbollmann on July 19, 2010 in Capitalism, Socialism