Tax Away The Deficit

Two weeks ago, a liberal co-worker claimed that the FY2012 Paul Ryan budget reduced the top tax rate from 35% to 25%.  I hadn’t seen that news, so a few days later, a USA Today appeared on my desk with a highlighted note about the top tax rate reduction.  I haven’t reviewed the veracity of that claim, but it sparked my curiosity about the affect of the change in the tax rate.

With some figures from the Committee For A Responsible Federal Budget, I completed some rough calculations on the change in the amount of revenues to the Federal Government if we go from 35% to 25% on the top tax rate: 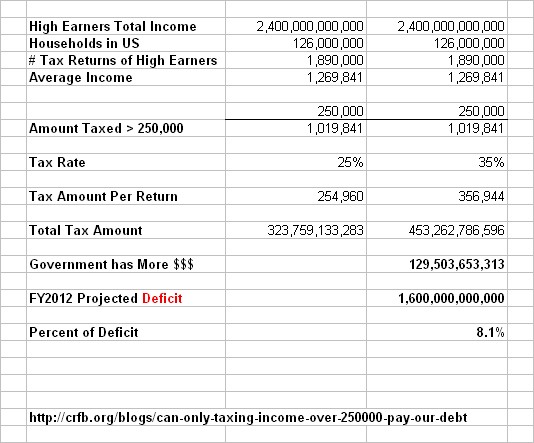 I suspect the number of Tax Returns is a little off, but it’s in the ball-park.  The bottom line is that the difference in the amount to the government is but 8% of the DEFICIT and around 3% of the TOTAL SPENDING. Minuscule.

From the CRFB article:

In a static analysis which excludes the effects we described above, TPC finds that the top two rates would need to increase to 72 and 77 percent just to get the deficit down to 3 percent of GDP by 2019. And these rates would have to get even higher after 2019; the fiscal situation is projected to get a lot worse after that.

The higher the taxes levied on this income, the more it will shrink. For one, taxpayers would use new and existing means to hide their income — labeling themselves as businesses, doing their banking offshore, spending their money on tax-preferred activities, gifting their money to lower earning family members, accepting more income in the form of fringe benefits, etc.

The choice is clear; the ONLY way to get the Deficit under control and PAY OFF the DEBT (of $14.3T) is to CUT SPENDING!

One response to “Tax Away The Deficit”