On 6/11/12, the Republican candidates for Missouri Senator debated in St. Charles, Missouri at Lindenwood University.  All three candidates, Todd Akin, John Brunner, and Sarah Steelman, performed admirably.  However, when looking forward to the race against the slippery and politically gifted Claire McCaskill, it’s clear that Steelman and Brunner are not really up to the task. 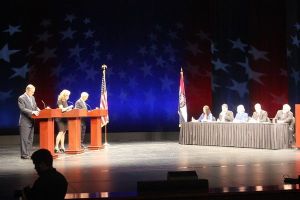 However, on the question of Syria, really the only serious foreign policy question that was asked, all three came up short.  Sarah haltingly opined something about exhausting diplomatic options and covert operations.  Akin basically wants to stay out of it on constitutional grounds.  And, Brunner offered no serious alternative (sorry John, I stopped listening to you about half way through).

I’m certainly no expert and don’t expect them to be, so let’s turn to John Bolton whom, yesterday, published a remarkable analysis of America’s situation, analysis of all the players including Russia and China, and his bold solutions for the problem.  It concluded:

Finally, in Syria itself, we should do now what we could have begun to do ten years ago (and what the Obama White House at least says it is doin

g now): find Syrian rebel leaders who are truly secular and who oppose radical Islam; who will disavow al-Qaeda, Hezbollah, and other terrorist groups; and who will reject Russian and Iranian hegemony over their country. We will need some reason to believe that this opposition can prevail against not only the Assad regime but also the terrorists and fanatics who also oppose Assad. This must be not a faith-based judgment but a clear-eyed assessment of reality. Such is the kind of opposition that, assuming it exists, we should support, aiming for regime change in Damascus when — and only when — it becomes feasible on our terms. On this matter, too, we should tell our European allies that we want their support for something other than semiotic diplomacy.

I’m a big fan of John Bolton, and many concerns were eased for me when he endorsed then-presumptive-nominee Romney back in March.  Anyone who gets called “the most controversial ambassador ever sent by America to the United Nations” for being to tough and conservative is a hero in my book!

One response to “Foreign Policy And The Missouri Senatorial Debate”