The FedGov released its unemployment propaganda for October 2013 showing a 0.1% bump in the unemployment rate.

I’m sure you can imagine that Breitbart and the NYT spun the news a bit differently:

Mike Flynn noted, “Over the last year, the economy has averaged 190k new jobs each month. This level is below the amount of job creation necessary to keep pace with population growth. Many more jobs than this, however, are needed to trim the ranks of the long-term unemployed and bring discouraged workers back into the labor force.”

For Nelson Schwartz, “Defying predictions that the government shutdown would sap job growth, private employers added more than 200,000 positions in October, well above even the most optimistic estimates on Wall Street.

How many people are working as a percent of all the people in the United States?  Here’s the trend…

At the end of Clinton’s administration, over 50% of the population in America were in the labor force!  That number stayed mostly the same and then increased through through the early parts of 2007.  That percentage has decreased since the beginning of 2007 and is now down by fully 2%.  You’re welcome to comment below as to what happened in early 2007 to turn the trend around. 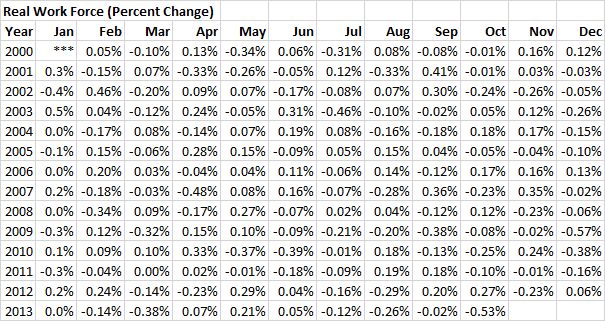 Things won’t get better in this country until millions more people are pulling the wagon!