The FedGov released its unemployment propaganda for December 2013 showing a massive 0.3% drop in the unemployment rate to 6.7% with measly 74,000 jobs created.

The Liberal Cheerleaders at ThinkProgress could only muster a matter-of-fact tone:

How many people are working as a percent of all the people in the United States?  Here’s the trend… 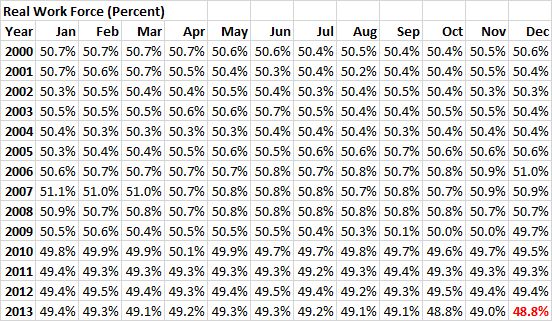 Down she goes to the lowest Real Work Force of the Century.

At the end of Clinton’s administration, over 50% of the population in America were in the labor force!  That number stayed mostly the same and then increased through through the early parts of 2007.  That percentage has decreased since the beginning of 2007 and is now down by fully 2%.  You’re welcome to comment below as to what happened in early 2007 to turn the trend around.

Things won’t get better in this country until millions more people are pulling the wagon!

Posted by bbollmann on January 30, 2014 in Economy, Unemployment