From our friend Aaron in Virginia:

A short while ago, I participated in a conference call on the Fast-Track/TPP/TPA/TAA legislation that is currently under consideration by the House of Representatives. As with the conference call last Thursday evening, this one was organized by Mark Lloyd (new Chairman of the Virginia Tea Party Patriots Federation); and also featured Richard Manning (President of Americans for Limited Government), who has been in DC full-time since last week lobbying congressmen to educate them on the destructive consequences of passing this legislation.

From tonight’s call, I gleaned the following significant points. You may already know some of them, but I want to make sure! 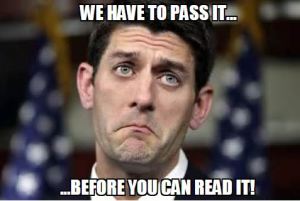 bly already know, the TAA was first defeated by a wide margin last Friday; and then the TPA was passed by a small margin. Because the TPA requires passage of the TAA, the TPA’s passage was of no consequence. HOWEVER, Boehner has arranged for a 2nd vote on TAA; and that is expected either late tomorrow (Monday), or, more likely, on Tuesday. Between now and then, Boehner will continue to twist arms to try to get the votes he needs for passage. The rumor is that he has already succeeded in getting some congressmen, who voted NO the first time, to switch their votes to YES!!!

2. Even if Boehner’s effort to get TAA passed is unsuccessful, it is likely that he will “repackage” both the TPA and TAA legislation into a single bill; and that will then be voted on sometime soon (probably after Tuesday). Knowing only that, there should be ZERO doubt in anyone’s mind that Boehner is hell-bent on giving Obama more unconstitutional authority!!

3. Remember: If this legislation is passed, it will give Obama unilateral authority to also “reconcile” existing US law with whatever these trade agreements stipulate. In essence, he would finally have the authority to “fundamentally transform America” — which was one of his statements on election night in 2008!!!

4. If you need any extra motivation to call your congressman (Hurt for most of you) to try to get him to change his prior TAA vote from YES to NO, you can find it in a statement made within a Washington Post opinion article by Lawrence Summers(see http://www.washingtonpost.com/opinions/rescuing-the-free-trade-deals/2015/06/14/f10d82c2-1119-11e5-9726-49d6fa26a8c6_story.html): “The repudiation of the TPP would neuter the U.S. presidency for the next 19 months.” I believe I speak for everyone on the conference call tonight when I say that this would be an absolutely wonderful thing!!!!

If you live in Hurt’s district, call any of his offices and/or email/talk to anyone to whom you think he might listen. If you live in Brat’s or Goodlatte’s districts, call them and let them know you appreciated their NO vote on TAA the last time; and to hold firm on that position. You need to ensure that theirs (ESPECIALLY Goodlattee’s) aren’t two of the votes that get changed by Boehner’s current arm-twisting!!!! If none of the three above is your congressman, then find out how he/she previously voted on TAA and take the appropriate action.

In summary, to me this feels a lot like the 2010 struggle to pass Obamacare all over again — only this time it is the blankety-blank Republicans that are trying to ram this through congress, not the Democrats!! If this legislation gets passed, it will likely ruin any hope of a near-term recovery of the American economy — not to mention giving Obama even more unilateral power to circumvent existing immigration law and grant amnesty/visas to more foreigners!

Posted by bbollmann on June 15, 2015 in Miscellaneous