Kim Davis’ Opportunity To Win For Separation Of Church And State

Unlike most, I don’t subscribe to the modern notion of church / state separation and am fully informed that it is not a law or a matter of Constitutional principle.  It’s a note from Thomas Jefferson to someone else. 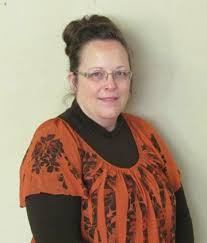 However, here we are and Kim Davis is in jail for one simple reason:  the governments of and within the United States have stepped over the wall of separation between church and state especially in the area of marriage.

One thing we know is that Lance and Larry, in 1787, didn’t go with a Justice of the Peace to the sugar white sands of the beaches of Destin, FL and define marriage.  Marriage was a religious institution and was described in The Bible long before the creation of the United States; it certainly predates the notion of separation of church / state; and it was created without the assistance of and likely prior to the creation of any form government let alone the United States government with its 1st Amendment.

At some point in the short history of the United States (and certainly after the Civil War), state governments stepped onto the wall of separation and began getting involved in the religious institution of marriage in the appropriate area of protecting the rights to property – especially that of women.

Eventually, the state decided it would fully step over the wall of separation, declare itself a religious institution, and start performing government marriages (GMs) outside of the church’s involvement.

Now, it’s decided that it has the right to define and redefine marriage.

All of this (except for the protection of private property and offspring) is the government – not the church – crossing the line between church and state.

Kim Davis has taken a stand on that line, and with a little logic from our elected representatives, we can rightly put the governments of this nation back on the correct side of the church / state line.  Let’s start from the point that Kim Davis should have made her stand…

In Kentucky, ALL Marriage Laws have been declared null and void:

Article 1, Section 1 of the U.S. Constitution declares, “All legislative powers herein granted shall be vested in a Congress of the United States, which shall consist of a Senate and House of Representatives.”  Section 29 of the Kentucky State Constitution declares “THE legislative power shall be vested in a House of Representatives and a Senate, which, together, shall be styled the ‘General Assembly of the Commonwealth of Kentucky.’” [Emphasis Added]

This, of course, means that no other branch of the Federal or State government, including SCOTUS, can make or change laws.  ALL powers for making or changing laws has been granted to Congress and the Kentucky Legislature.  Again, SCOTUS cannot make or change laws.  They can declare laws unconstitutional and have done so for laws excluding homosexuals from marriage.

Therefore, any law that has defined marriage as only between a man and a woman has been declared null and void.  SCOTUS can’t change the law to say something else; Article 1, Section 1 and KY Section 29 says they do not have the powers to do that.

As used and recognized in the law of the Commonwealth, “marriage” refers only to the civil status, condition, or relation of one (1) man and one (1) woman united in law for life, for the discharge to each other and the community of the duties legally incumbent upon those whose association is founded on the distinction of sex.

Again, the activity of distributing ANY marriage license in Kentucky is illegal until the Legislature convenes to create a law that rightly defines marriage and the Governor signs such a law.

This is where Kim Davis must make her stand…

The words ‘marry’, ‘marrying’, ‘marriage’, et al should have never been allowed to enter the sphere of centralized governance and must be removed.  Government, in its bigoted ineptitude, having originally defined marriage (implicitly and explicitly) as between a man and a woman, has now defined marriage as including coupled homosexual marriages disregarding and excluding other types of marriages.  So naturally, the fight looms regarding multi-partner relationships or any other type of relationship that wants to be recognized by the government.

Government has no business in the area of civil relationships other than to protect the private property of those involved, ensure that government benefits and entitlements are properly distributed before and after death, and ensure terminations of such relationships are orderly and fair (especially to offspring).  Other than that, government is not a party to the relationship.  Therefore, it has no course to define or redefine the words used to describe that relationship.

To that end, the words ‘marry’, ‘marrying’, ‘marriage’, et al must be removed from all federal, state, and local constitutions, laws, statutes, regulations, ordinances, and policies and immediately replaced with words such as Civil Relationship Unit(s) – or CRU, or cru.

Then, if any of those people can fin

The problem is not that a religious person is in government; the problem is that government has long crossed the line of separation into religion.  And, it’s time to get it out.

.
Kim Davis has the opportunity with her lawyer, Mat Staver, to push government back over the line, keep her job, and become a hero of the religious community.  Help her friends and family help her pursue this course.

Posted by bbollmann on September 7, 2015 in Congress, Courts And The Law, Marriage, SCOTUS