Even though Heritage can sometimes be questionably conservative, here is what they are:

Founded in 1973, The Heritage Foundation is a research and educational institution—a think tank—whose mission is to formulate and promote conservative public policies based on the principles of free enterprise, limited government, individual freedom, traditional American values, and a strong national defense.

They recently released their unapologetic scorecard for the 112th Congress.  Below is the report card for Missouri’s U.S. Congressional Representatives. 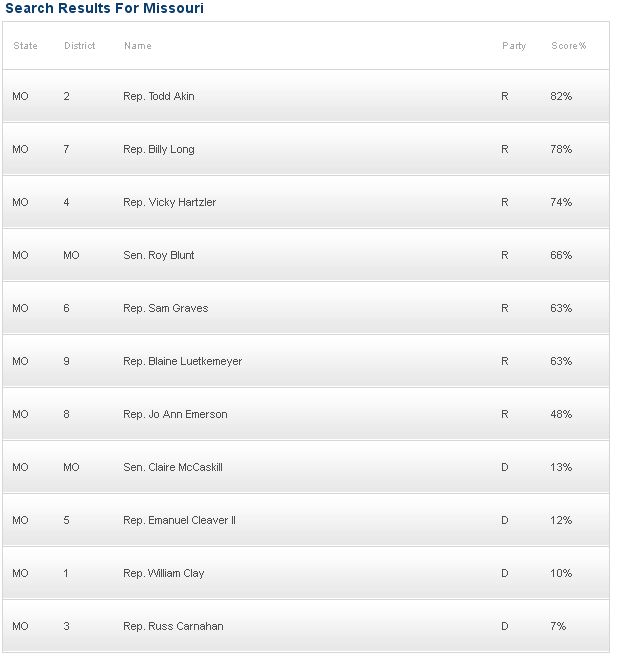 Now, I’m sure they all have explanations about how they voted on all the measures for which they were rated negatively.  It might be a good time to publish that reasoning for the voters to decide… …that is… if they want the votes of an informed electorate.

Posted by bbollmann on December 30, 2011 in Congress, Conservative, Election

This was sent to the Southeast Missourian as  a Letter To The Editor on 7/12/10:

In the near future, Missouri’s Senators will have an opportunity to vote to confirm Elena Kagan for the Supreme Court. The question this time is whether or not Bond and McCaskill will vote with Missouri values or with Washington Politics.

Both Missouri Senators voted to confirm Sotomayor. During her nomination hearings, Sotomayor, under oath, testified that she believed in the 2nd Amendment. “I understand the individual right fully that the Supreme Court recognized in Heller.”

However, in the McDonald vs. Chicago case, which extended Heller to a state-level gun-ban, Sotomayor joined the dissent saying:

“In sum, the Framers did not write the Second Amendment in order to protect a private right of armed self defense.”

Here (http://www.redstate.com/brian_d/2010/07/01/fact-kagan-is-anti-second-amendment/) is a great review of Kagan’s anti-gun stance!

We know that Sotomayor lied during her confirmation about her anti-gun stance; we know Kagan will do the same in dancing around the issue. Will Bond and McCaskill this time face the reality of her views against the text of the Constitution and Missouri’s values?

I pray this time they’ll vote NO! You already have one reason to vote out McCaskill (Sotomayor); her vote to confirm Kagan will just be more fuel for the fire. And, the RINO Kit Bond… …he can’t retire fast enough for me.

Take some time and look into her thoughts on the 1st Amendment if you want a REAL scare!

Posted by bbollmann on July 12, 2010 in Amendments, Bill Of Rights, Constitution, Supreme Court